We show how to deal with key-value pairs and how to manage a key-value store using JavaScript's localStorage API.

Dropping a DOM node without consulting its parent

For quite a long time, it was pretty cumbersome to delete a node from the DOM of an HTML document because one had to go to its parent and ask it to destroy its child (by invoking removeChild), like so:

It has always felt strange having to use such an indirect approach (having to ask the parent) for the very basic operation of dropping a DOM node.

CRUD Operations with IndexedDB - Part 1: Creating and Clearing a Database

In this article, we show how to create and clear an IndexedDB database keeping all code in a single HTML file. Creating an IndexedDB database means first creating an empty database, and then adding records to its empty tables (or "object stores"). In Part 2, we will explain how to retrieve, update and delete IndexedDB records, such that we get the full collection of CRUD operations: Create, Update, Retrieve and Delete.

The Resource Description Framework (RDF), together with its extension RDF Schema, is a logical formalism that allows formalizing information models in the form of RDF vocabularies and representing propositional information on the Web, embedded in web pages or in the form of special web data sources. OWL extends RDF by adding many additional language elements for expressing constraints, equalities and derived classes and properties in the context of defining vocabularies. Unfortunately, both RDF and OWL have many usability issues. 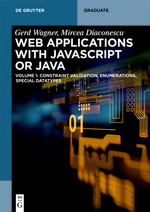 We have published Volume 1 of a new open access online textbook Web Applications with JavaScript or Java. It covers the topics of constraint validation, enumerations and special datatypes.

The following example discussion is from the online book Web Applications with JavaScript or Java.

Home Automation is made simple for everyone, with the industrial grade PRODINo ESP8266 based module. It can be programmed with the Arduino IDE and allows to control (ON/OFF switch) mains (110-240 VAC) powered devices such as light bulbs, water pumps, cafe machines or garage doors.

As opposed to the less powerful Arduino, the competitively priced and WiFi-enabled ESP8266 supports the Web-of-Things (WoT) since it can be programmed in JavaScript.